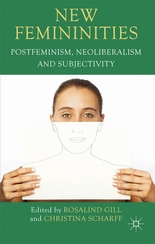 Notable chapters: “Are You Sexy, Flirty, Or a Slut? Exploring ‘Sexualization’ and How Teen Girls Perform/Negotiate Digital Sexual Identity on Social Networking Sites” by Jessica Ringrose, “Media ‘Sluts’: ‘Tween’ Girls Negotiations of Postfeminist Sexual Subjectivities in Popular Culture” by Sue Jackson and Tiina Vares, “The Contradictions of Successful Femininity: Third-Wave Feminism, Postfeminism, and ‘New’ Femininities” by Shelley Budgeon, and “Will These Emergencies Never End? Some First Thoughts about the Impact of Economic and Security Crises on Everyday Life” by Gargi Bhattacharyya

The introduction to this book by Rosalind Gill and Christina Scharff is super-duper helpful for positioning current girlhood studies (circa 2011!). In explaining the structure of the book and the title of the collection, they take up the social and economic discourses that surround developing notions of femininity in the 21st century: “The notion of ‘new femininities is designed to be wrapped in scare quotes and followed by an interrogative. It seeks to open up questions about the ways in which gender is lived, experienced, and represented” (2). They raise one such question about the way academics write about “girls and women” and “masculinities”: why not “femininities”? Still, they are not ignorant to the implications of framing the study as “new”: “We are wary of a world saturated by consumerist logics and an attention economy in which a premium is placed (even in academia) on the ‘new’ (if not improved!)” (2). The way the book is positioned in a self-aware manner is wonderful.

The intro is also helpful for understanding a working definition of postfeminism in the several ways the word is used (3), neoliberalism (5), subjectivity (7), and transnationality (9), ultimately asking whether or not women are the ideal neoliberal subjects (7).

My other favorite chapter was Budgeon’s “The Contradictions of Successful Femininity: Third-Wave Feminism, Postfeminism, and ‘New’ Femininities.” In her essay, she takes up the contradictory and complicated messages about women, gender, and feminism encountered by young women, noting that “women are increasingly more likely to identify with generation than gender” (280). As patriarchy is being dismantled as the primary object of critique, hybridity, globalism, and the multiple aims of feminism complicate women’s understanding of their roles and the work that feminism does, especially as feminist politics increasingly becomes a “politics based on self-definition” (283). Budgeon asserts what I think many women of my generation experience: “successful femininity now involves living a tension between exercising the traditional feminine mode of relationality and the exhibition of individualized agency previously associated with masculinity” (285). Put simply, we’re expected to be it all. The argument strongly reminded me of Liz’s struggles in “Feminism, Postfeminism, Liz Lemonism.”

On the other hand, I found this book somewhat-to-very upsetting. I’m square enough to think that the sexualization of young women is a bad, dangerous trend and I’m not comfortable with young women selling sexual favors online. The “reclaiming” of the term slut does not seem at all empowering to me. I don’t want to be a slut. I don’t think we should be calling each other sluts. (And, sidebar: I think being classy and showing discretion and self-control is more powerful anyway.) The tone of this book sometimes made me feel like I am hopelessly out of touch, but I hope to God that’s not the case.