About PhDs and Pigtails

When I was in middle school, my mother, who was getting her Master’s in Education, read Reviving Ophelia, Mary Pipher’s best selling book about tumultuous female adolescence and the vanishing self esteem that teen girls experience. In the years that followed, I was plagued by my mother’s questions: “Are you eating?” “Do you feel depressed” “You know that having a boyfriend isn’t everything?” In the midst of my teen angst, I was shaking my fist at Pipher, whose description of adolescence seemed to be controlling my mother’s interpretation of my own process of grappling with growing up. As annoyed as I was then, I’m equally grateful to my mother now, because she loved me enough to pay attention and to be proactive. She was also, however, unknowingly laying a foundation for my future research interests.

I started my M.A. intending to specialize as a Victorianist, but my questions about girlhood, sentimental culture, and national mythology lead me to a specialization in American literature and transnational feminism for my Ph.D. Specifically, I am interested in the way that Victorian discourses about childhood innocence, reaching their peak in the cult of the child, are still reflected in contemporary discourses about children, especially in the depiction of girls. Girlhood studies unites my research interests in Victorian ideas about femininity and family, gender studies, and cultural studies. The ways in which girls are depicted and discussed are intimately connected to a network of issues including class, race, nationality, and religion, as well as with the gender ideologies that are ascribed to their bodies. I am further interested in connecting twentieth century discourses about girlhood to their Victorian predecessors, working out how the tropes of girlhood are reified, reworked, or contradicted (or sometimes all of the above) as twentieth century literature and culture also works with evolving notions about femininity, sexuality, childhood, and other issues. Like my mother’s process of projecting contemporary discourses about girlhood onto my experience, I am interested in how the ways that literature and other media about girls, or addressed to girls, wrestle for control of what the experience of girlhood ought to be, even if they attempt to give girls a voice as well. 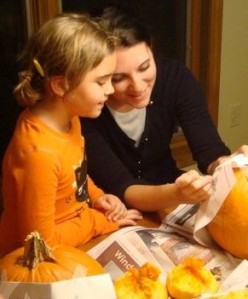 My little sister inspires me to think critically about and advocate for ways her experience of girlhood can be different.

Aside from girlhood studies, I am also interested in cultural studies more generally, espeically media studies and transnational feminism. Recently, I have done several works primarily focusing on television, through critical frameworks such as performance, gender studies, or intertextuality. For example, I have a chapter forthcoming in Time and Television: Exploring Narrative Time in 21st Century Programming (Mississippi UP, 2012) about how the use of a do-over in Pushing Daisies overlaps with the political discourses surrounding the 2008 presidential election, in which I use the critical work of Henry Jenkins, Amanda Lotz, and John Fiske about transmedia and the interaction between audience and new media. I have also written essays discussing gender performance and monster theory in Showtime’s Dexter, Veronica Mars as a feminist icon, the culture of debt and giving in The Hunger Games, and the portrayal of overachieving girls on Glee.

For me, the ultimate goal is to use my education to help effect change. My long-term objective is to work with social justice and/or advocacy organizations working with adolescent girls, particularly in education. Through my training in analysis, writing, and critical media literacy, I hope to get involved in the production of inclusive and engaging media for young people. I am also interested in teaching literature and/or composition courses at a 4-year university while working on research and writing pursuits, helping students engage with complex theories and works of literature, developing skills that they can use beyond the university.

2 thoughts on “About: Then”