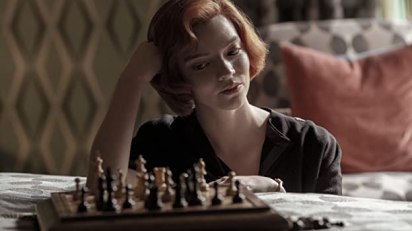 Like many people in the last few weeks, I started watching The Queen’s Gambit on Netflix and ended up binge-watching it because it is just that good. The seven-episode limited series follows the rise of chess master Beth Harmon from her learning to play from the janitor at her orphanage to playing the Russian world champion. I have loved chess off and on since I was a girl. I was in the chess club in the first grade and grew up playing chess with my dad. One of my life’s regrets is that I didn’t keep playing with him. I gave up in college because I could never, ever beat him and I wasn’t at a place where I wanted to/could put in the time to get better. When I worked as a jail librarian, chess came back onto my radar, because it was popular with the guys and some of them gave me tips to help me beat my husband. Anyway, The Queen’s Gambit is fabulous and in place of doing a cohesive analysis, I just want to do some bullet points of what stood out to me as I watched. Spoilers ahead.

Did you watch The Queen’s Gambit? What did you think?

The Queen’s Gambit runs for 7 episodes and is rated TV-MA. It was created by Scott Frank, Scott Allan, and Allan Scott.

What is the Queen’s Gambit Opening?

2 thoughts on “The Queen’s Gambit, Addiction, Grief, and Genius”