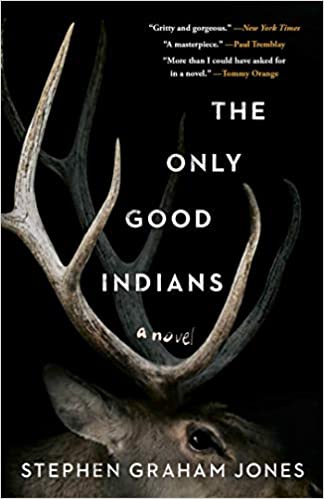 The Only Good Indians by Stephen Graham Jones  (Mild spoilers ahead)

During the Indian Wars, Philip Sheridan, an army officer, was quoted as saying “the only good Indian is a dead Indian.” That terrible saying was later picked up by Theodore Roosevelt, who said, “I don’t go so far as to think that the only good Indians are the dead Indians, but I believe nine out of every 10 are.”

Stephen Graham Jones makes a nod to that horrible history in the title of his new novel, The Only Good Indians. The novel centers on a group of four friends who commit a transgression against tribal rules and nature while on a hunting trip just before Thanksgiving and, ten years later, are made to pay for it by one of the victims of their hunt. Basically, a young, pregnant elk who they shot on land reserved for the elders is coming back to get them. Animal lovers, there are a couple of parts in this book that are going to be hard for you.

I thought that the first half of this novel was nearly perfect. Jones establishes the haunting of Lewis, one of the aforementioned friends, in a way that, like The Turn of the Screw, has the reader (and Lewis) questioning if he is just losing his grip on reality. There are some terrifying, hard to stomach images, but they stem from accidents that are really pretty mundane. The result is a highly atmospheric, tense, and downright scary ghost story.

Along with the scary bits, I think Jones also does a great job developing his characters. Lewis has a rich inner life, which builds that uncertainty over whether he is being haunted or not. Meanwhile, the two main female characters in this first half: Lewis’s wife, Peta, and coworker, Shaney, take up less of the narrative,  but there are hints of well-rounded, interesting characters beyond how they relate to Lewis himself.

And, there was some fun, odd humor in the mix as well. One of my favorite moments came when Lewis is trying to figure out what is happening to him and ends up making himself a grilled cheese, after contemplating something that reminded him of gross cheese. It is such an weird, vivid moment:

“At the kitchen table he stands before the elk bundle—the hairy burrito—for maybe thirty seconds, finally pushes a finger into it. It’s mushy and rough at the same time, smells like some soft cheese that was on the table at a party once, that he knew better than to eat.

It’ll wreck his digestion, but, figuring that’s the least of his concerns right now, he makes a grilled cheese for breakfast…” (87).

At other moments, the humor comes from the headlines Lewis writes in his head about his day-to-day life. For example, after he cleans up the kitchen: “the headline scrolling across the back of his forehead: INDIAN MAN FIRST IN HISTORY TO PICK UP AFTER HIMSELF” (88).

In the second half, the book loses steam. It continues with more of the story focusing on Lewis’s remaining friends, and dipping into the consciousness of the young elk. I found this second half less tense and therefore less scary. I could see an argument that this portion of the book brings resolution to the plot that began ten years before, but I think in widening the scope of the story, the horror is diluted and the writing gets less intimate and engaging. Even still, the first half of this book includes images and writing that will stick with me for a long time. It was an excellent read. If you have a large TBR pile going, I think this book would be great to pull out on a blustery day in late Fall. The setting around Thanksgiving time lends itself to the scary atmosphere.

Live Stream of Author Event at the Tattered Cover

One thought on “(Book Review) The Only Good Indians”