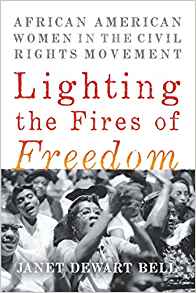 In Lighting the Fires of Freedom, Bell has given brief portraits of nine important women from the Civil Rights Movement and produced their stories in their own words, based on her interviews with them. The women included are Leah Chase, June Jackson Christmas, Aileen Hernandez, Diane Nash, Judy Richardson, Kathleen Cleaver, Gay McDougall, Gloria Richardson, and Myrlie Evers. Their experiences range from careers in publishing, psychiatry, and the law as well as work in the Civil Rights Movement including marching, taking part in the Freedom Rides, and losing loved ones to racial violence.

The book also features stories from women who were at different stages of their lives during the Civil Rights Movement and that gives an idea of how generational diversity came into play. For example, Leah Chase, who Tiana in The Princess and the Frog is based on, said:

“People my age, we were a bit frightened about it. It was so different from what we were trying to do. For instance, we were working with the NAACP, trying to work in the system, abide by the rules. Don’t offend this one. Don’t offend that one. And get it done. But then here comes the young people in the Movement and they said, ‘No. We gonna do this.’ And we thought, ‘Oh, God, what are they gonna do? What are they gonna do?’ People my age were kinda frightened. We didn’t know what was gonna happen.” (13)

In my dissertation, I had a chapter about Ruby Bridges and Sheyann Webb and Rachel West-Nelson and their personal account of the march in Selma, AL, Selma, Lord, Selma. For that chapter, I did a ton of research on young people in the Civil Rights Movement, so I was excited to read the profile on Diane Nash, who helped found the Student Nonviolent Coordinating Committee (SNCC), the group of young people behind important Civil Rights Movement events such as the Freedom Rides. She was eventually elected the chairperson of SNCC and offers these thoughts on her fears:

“It was daunting. I’m not sure I did overcome my fear. I just kept doing what had to be done. The fear was definitely there, but fear was also a great motivator, because I knew if we were not efficient someone could get killed or injured. So that fear, I think made us extremely efficient.” (98)

Judy Richardson, who also worked with SNCC and went on to a career in publishing, notes the importance of hearing women’s stories from the Movement and also to focus on how the Civil Rights Movement made things better for everyone:

“In terms of the legacy of the Movement, I think it’s important to recognize that we didn’t just change things for black folks…So for example, with affirmative action we open up the door for lots of different kinds of people. It’s not just Latinos and Asian Americans who come in. That Stanford University study of affirmative action found it is white women who most benefited from affirmative action, and I’m thinking, ‘Well, somebody needs to tell them!'” (127).

On the intersection of race and gender, Gay McDougall, who worked in the anti-apartheid movement, said:

“Gender discrimination was everywhere, except at home, because my home and my extended family were very women dominated. But everywhere outside of home was male dominated. There were the churches, there were the schools. It’s interesting in the schools–most of them had female teachers but had male leadership and administration people. I think it was everywhere. Certainly all through the Civil Rights Movement.” (162)

I definitely recommend this book for people who are interested in both the history of the Civil Rights Movement and first-person accounts of individuals’ parts in it. The book does a great job of providing brief, poignant stories from the perspectives of women who were part of the Civil Rights Movement in various capacities and at different stages of their lives. In doing so, it provides a glimpse at the diverse opinions, talents, and perspectives that went into big moments in the Movement.