Frozen Ready for the Oscars! by violetatranceart

So, as I wrote about last year (Girls and Oscar Night 2013), given the general shortage of great, serious roles for girls in the film industry, 2013 was a good year for girls in film. (And for me, as I won the Oscar pool with my friends. 🙂 ) 2014, not so much.

This year we have Frozen. And…Frozen, nominated for Best Animated Feature and Best Original Song (“Let it Go”). In 2013, there was Beasts of the Southern Wild, Moonrise Kingdom, and Brave, lackluster as it was. This year, there’s just Frozen, spectacular as it is. Since I have written about Frozen at length, as has much of the internet, I’m not going to do that here.

Honorable Mention this year goes to Gravity, nominated for 10 Oscars including Best Picture, Best Actress, and Best Director. Although it is not about girls, Sandra Bullock’s achievement in acting and at the box office was hopefully a giant leap for womankind in film. (sorry, sorry). As I wrote in my column at the Waynedale News:

Another aspect of Gravity worth noting is that Alfonso Cuarón insisted on Dr. Stone being a woman, even fighting with studios who wanted a male lead. What is particularly successful about this female lead, however, is that in no moment could the character not have been a man. Her story, her skills, and her personality are not written in any way that draws attention to her sex. Therefore, the audience is never lead to think that she is heroic “for a girl.” Kowalski’s comparative skill and level-headedness come from extensive experience. Stone has the answers she needs, but she has not had the practice to build her confidence. In short, our lead character happens to be a woman, but that fact is significant only because—somehow–that fact is novel.

Check out the Complete Nominations List for more information on the 86th Annual Academy Awards.

In other news, Miss Representation penned a letter in today’s LA Times calling the industry to accountability about its gender inequality. 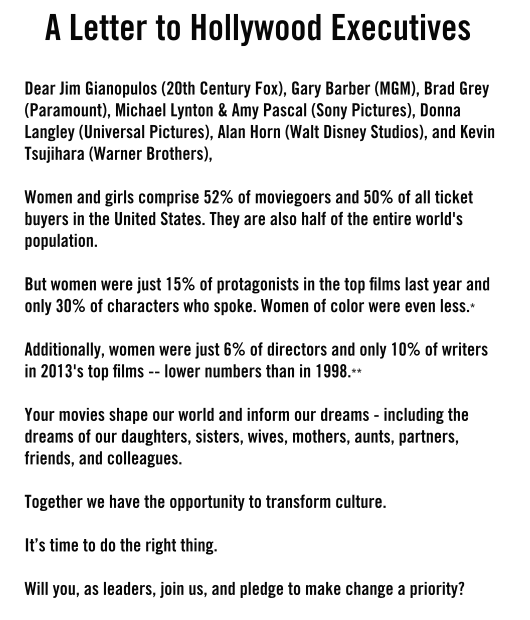 And in infographic land: