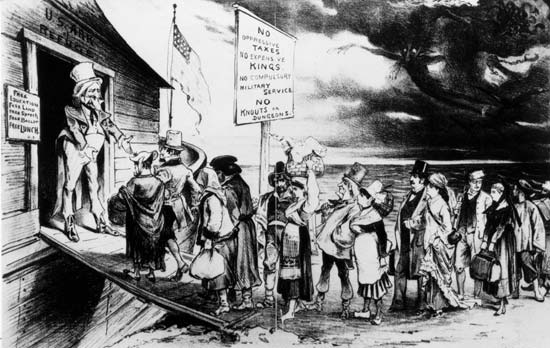 American cultural citizenship is a big part of my rationale. Huge. I have two clusters of theory on my reading list dealing with defining nation and citizenship. Not all are covered in these notes, but most are. I’m delaying a couple because one fits nicely with my transnational feminism list and the other is hard and needs more time. Anywho, what I’m trying to suss out through looking at these works is how alternative definitions of citizenship and the national community influence the discourses about American identity, immigration, and multi-culturalism. I tend to lean heavily toward thinking about cultural citizenship, rather than legal citizenship, but to do so well, I have to really lay out what that means. I hope that these notes will help me think more critically about the im/migrant narratives on my list, as well as political discourses about American identity.

The nice thing for me about these two is that we talked about them a lot in the Latin@ Cultural Citizenships seminar I took last fall. I even wrote a short paper connecting these two articles to the poem “Puerto Rican Obituary”, which helps me a lot as a literature person because I have a concrete to connect my thoughts to.

In “Cultural Citizenship, Inequality, and Multiculturalism,” anthropologist Renato Rosaldo examines the distinction between citizenship as a legal category that allows one to participate in the meaning and scope of the community in which one lives. In other words, legal citizenship pertains to one’s relationship to the state–the government. For Rosaldo, cultural citizenship means having a place and a voice in the public sphere (the nation) and claiming rights and recognition in relationship to other citizens.

Rosaldo’s argument focuses specifically on the position of Latinos in the United States, but it has pertinence for others as well. In relationship to the public sphere, he writes, “One must consider categories that are visibly inscribed on the body, such as gender and race, and their consequences for full democratic participation. The moment a woman or a person of color enters the public square both difference and inequality come to the surface. It is difficult to conceal differences of gender and race, and given the prejudiced norms under which we still live, inequities will come to the surface” (29). In this way, there are certain visible barriers to cultural citizenship, even for people who may have the full legal rights of citizenship.

Also of note in this regard is Rosaldo’s argument about the way that the terms “alien” or “illegal” impact the citizenship of all Latinos in the United States as “by a psychological and cultural mechanism of association all Latinos are thus declared to have a blemish that brands us with the stigma of being outside the law. We always live with that mark indicating that whether or not we belong in this country is always in question” (31). He further asserts that the term “illegal’ suggests that undocumented workers live outside the law when in reality for the most part they are more law abiding because of fear of deportation. Finally, the “icon of the Latino illegal alien” creates the impression that all Latinos in the U.S. are immigrants. He cites the phrase “No cruce la forntera, la frontera me cruzo a mi” (“I did not cross the border, the border crossed me.”) to explain how many Latinos, especially in the Southwest, are indigenous to this country. (More)

In “Illegal status and Social Citizenship: Thoughts on Mexican Immigrants in a Postnational World,” Adelaida R. Del Castillo describes social citizenship as a process through which undocumented Mexican immigrants create community and practice citizenship without the consent of the United States, a process that “questions the fixity of political communities” (92). She asserts that “The unauthorized enactment of social citizenship by those outside the state as well as the application of human-rights discourse to the situation of undocumented Mexican immigrants remove the latter from the parameters of the state and invite a postnational approach to the challenges posed by undocumented immigrants” (92).  (More)

. She opens with the example of Jeannie Barroga’s play “Walls,” about the controversy over the Vietnam Memorial designed by young Chinese American architect Maya Lin. Lowe asserts, “Although the law is perhaps the discourse that most literally governs citizenship, U.S. national culture–the collectively forged images, histories, and narratives that place, displace, and replace individuals in relation to the national polity–powerfully shapes who the citizenry is, where they dwell, what they remember, and what they forget” (2, emphasis mine). She argues that in the U.S. not only class but also “historically sedimented particularities of race, national origin, locality, and embodiment remain largely invisible within the political sphere” (2). In this way, her argument aligns well with Rosaldo’s. She continues, “In this sense, the legal and political forms of the nation have required a national culture in the integration of the differentiated people and social spaces that make up ‘America,’ a national culture, broadly cast yet singularly engaging, that can inspire diverse individuals to identify with the national project” (2).

She puts citizenship and the mythology of the nation in tension with one another, arguing that the ethos of America immerses the subject in both the memories and narratives of the nation and the is articulated in language, social hierarchy, and political representation. “In being represented as citizen within the political sphere, however, the subject is ‘split off’ from the unrepresentable histories of situated embodiment that contradict the abstract form of citizenship…It is through culture that the subject becomes, acts, and speaks itself as ‘American.’ It is likewise in culture that individuals and collectivities struggle and remember and, in that difficult remembering, imagine and practice both subject and community differently.” (2-3)

Lowe, like del Castillo, also looks at how the citizen is defined against the (Asian) immigrant, “legally, economically, and culturally.” She asserts that these discourses look at the Asian immigrant as a population/person to be integrated and as “contradictory, confusing, unintelligible elements to be marginalized and returned to their alien origins” (4). This assertion fits really well with the arguments made in America’s Asia and American Narratives which look at how American discourses portrayed the immigrant is needing to assimilate and being unassimilable. According to Lowe, “if the law is the apparatus that binds and seals the universality of the political body of the nation, then the ‘immigrant,’ produced by the law as margin and threat to that symbolic whole, is precisely a generative site for the critique of that universality” (8-9).

Then, in response to cultural sites and processes that reconcile the “non-American” with the “American” through multiculturalism, she argues that “cultural productions emerging out of the contradictions of immigrant marginality displace the fiction of reconciliation, disrupt the myth of national identity by revealing its gaps and fissures, and intervene in the narrative of national development that would illegitimately locate the ‘immigrant’ before history and exempt the ‘immigrant’ from history” (9).  (Lowe includes a long and critical history of the legal definitions of citizenship and the exclusions of Asian immigrants that will be important to revisit as I get more into the Asian American literature on my list.) (More)

Thinking about these different definitions of citizenship–cultural and social–and the way that each writer thinks about the role of the immigrant in pressuring the boundaries of citizenship and the citizen’s relationship to the nation and the state is helpful for thinking about the way that immigrant narratives function in American mythology and literary identity, as well as how immigrants construct their narratives. So far, I’ve been mostly reading narratives from the early 20th century, but those narratives have depended heavily on the narrative of the melting pot, which grants cultural citizenship through assimilation. I anticipate that the narratives will get more critical of this discourse and reflect more on hybridity or the contradictions of migrant experience. Already, I’m thinking about Abraham Cahan’s “The Imported Bridegroom” which takes a far more ambivalent stance toward assimilation as Russian-Jewish immigrant Asriel finds that once he’s achieved the American Dream he longs to go home. Once home, he finds that he no longer fits there. It’s changed and so has he. Further, when he brings a “jewel” of a Torah scholar home with him to marry his daughter, Flora, he finds that America ruins Shaya. In this story, unlike that of Mary Antin in The Promised Land, the values of America are placed in contradiction of the values of “home” and there’s no clear resolution between this emotional displacement.

I’m also reminded of Achy Obejas’s immigration narrative in “We Came All the Way from Cuba So You Could Dress Like This?“. Unlike Asriel, Achy is brought to America as a child–the daughter of Cubans seeking asylum after the Revolution. While her parents continually spin the narrative that they came for their daughter, her father continues to dream of returning to Cuba. Obejas’s story shows different ideas of cultural success. Her father dreams of her totally in the public sphere as a lawyer or a judge. Her mother’s dreams focus on domestic bliss, an undocumented Haitian maid, and a broadcasting career–merging public and domestic status. Meanwhile, Obejas, a lesbian, wonders if she could have been the woman she is if she had stayed in Cuba. She longs to return to Cuba to imagine who she could have been and “choose” America for herself.

What is a Nation, Anyway?

Late 19th century political cartoon- the melting pot as the equalizer and path to citizenship.

Imagined Communities: Reflections on the Origin and Spread of Nationalism

In Imagined Communities, Benedict Anderson set out to provide a more adequate history for the development of nationalism. This book has become a touchstone for thinking about nationalism (and other communities) in academic circles. He defines the nation as an “imagined political community that is imagined as both inherently limited and sovereign” (Imagined 7).

Ernst Renan, “What is a Nation?”

In an 1892 speech and essay, Ernst Renan wrote of “civic nationalism” as opposed to “ethnic nationalism.” While Anderson focuses on the modern nation, looking back to the end of the 18th century, Renan takes a longer historical focus, comparing contemporary (to him) nations with ancient civilizations such as the Roman Empire and Egypt. Renan asserts the importance of language and religion in establishing a nation in which the rulers and the ruled are distinguished by class not by race or ethnicity. Ultimately, however, Renan’s arguement arrives in Anderson’s neighborhood: “A nation is a soul, a spiritual principle. Two things, which in truth are but one, constitute this soul or spiritual principle. One lies in the past, one in the present. One is the possession in common of a rich legacy of memories; the other is present-day consent, the desire to live together, the will to perpetuate the value of the heritage that one has received in an undivided form.” I think there’s a lot of truth in Renan’s argument but I also think it is limited in that he is clearly thinking only about white men. I think in this way, his argument could stand in well for a baseline against which to read the arguments of Rosaldo, Anderson, del Castillo, and Lowe.

, but, well, it’s Homi Bhabha and I’m having a harder time with it. It’ll get its own notes later, probably closer to my exam date. (Btw, Homi Bhabha was one of my committee member’s PhD advisor. That blows my mind a little.)

del Castillo, Adelaida. “Illegal status and Social Citizenship: Thoughts on Mexican Immigrants in a Postnational World.” Women and Migration in the U.S.-Mexico Borderlands: A Reader. Denise A Segura and Patricia Zavella, eds. Durham: Duke UP, 2007.