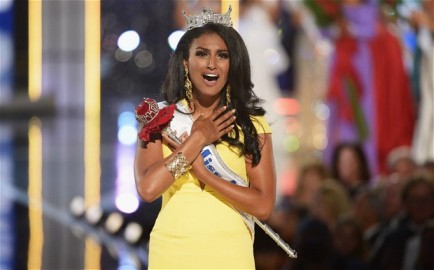 Here she is, Miss America! So last night, Miss America was crowned, the first of Indian descent–Nina Davuluri. Unless we’re talking Little Miss Sunshine, pageants aren’t really my thing. I had a moment of “Yay!” and didn’t give it a second thought until I saw that the idiot mob that is the internet expressed its outrage. Not only were people angry that Miss New York won over the super white, super conservative Miss Kansas (who, admittedly, seems pretty tough), they misidentified Davuluri as an Arab, tweeting hateful things like “How the f–k does a foreigner win miss America? She is a Arab! #idiots” or “9/11 was 4 days ago and she gets miss America?” Others made clear that Miss America is supposed to be white: “I swear I’m not racist but this is America” or “Miss New York is an Indian.. With all do respect, this is America.” (tweets via BuzzFeed) What we’re seeing here is not only clearly racist, it also intersects with the narrow definition of American female beauty championed by the Miss America pageant.

Of her win, Davuluri says, “‘I’m thankful there are children watching at home who can finally relate to a new Miss America.” (Guardian) That is a good thing. I just hope those children don’t have access to Twitter or do have access to people who will talk out this weird xenophobic reaction with them.

Sure, Davuluri is brushing it off as the stupidity that it is, but I think people’s comments about this and other incidents that champion people of color as American in pop culture pageantry (see Marc Anthony below) clearly indicate that people still think American = white European descent.  In studying for my exam on twentieth-century multi-ethnic American literature, I’m focusing time and again on the way that competing voices tried to maintain that hegemonic definition of American citizenship or tried to find a different cultural identity that was more inclusive. The melting pot is out, the salad bowl seems trite, but this question of what it means to be American is a persistent part of our national character as cultural productions wrestle with a national mythology of diversity and a democracy that champions unity. I’m embarrassed that we’re still at a point where a Miss America of South Asian descent is cause for outrage.

(You might also be interested in Muscogee Daughter: My Sojourn to the Miss America Pageant (American Indian Lives)

, a memoir about a Native American’s journey through the Miss America pageant which also takes a critical look at what the pageant means by America. Or Aspiring to Home: South Asians in America (Asian America)

which has a fascinating chapter about the Miss India USA pageant.)

The whole thing reminds me of the outrage at Marc Anthony singing “God Bless America” at the MLB All Star Game. Idiot baseball fans tweeted racist reactions about Anthony not being American. Anthony’s response was pretty spot-on:

“If I’m not qualified, I don’t know who is,” said Anthony. “I was born and raised in New York; I’m an American; I’m Puerto Rican. And for those who don’t know, Puerto Rico is a territory of the US to start with…But if you think about it,” he added astutely, “Irving Berlin was a Russian-Jewish immigrant who wrote ‘God Bless America.’ Just think about that for one second.” (NBC)

As my mother says when she’s frustrated, “God bless America.”

*He clearly didn’t mean Native Americans or Mexican Americans in the borderland, though.

5 thoughts on “Miss America is American (So is Marc Anthony)”