Yesterday, our campus was visited by Nahid Rachlin, novelist and author of the memoir Persian Girls. Rachlin visited my WGS class and I had the pleasure of having dinner with her, faculty, and one of my colleagues before a reading and question session on campus.

Persian Girls tells Rachlin’s story, starting when she was adopted by her aunt when she was 6 months old. Her aunt couldn’t have children and begged her sister to let her adopt one of her many children. When she was nine, Rachlin’s father came and forcibly took her back home. Growing up in Iran, Rachlin’s ambition to become a writer and her desire for knowledge, often found in banned books, came up against restrictions of censorship and the traditional ideals of her parents. Her story runs parallel to her sister Pari, who desired to become an actress but instead was trapped in an unhappy and dangerous arranged marriage.  Eventually, because he fears that her rebellious streak would get her and the whole family in trouble, Rachlin’s father agreed to let her go to college in the United States.

The memoir is a gripping read and full of beautiful reflections about a culture in transition and the pain of being born in one world and longing for another. Matt Beynon Rees of Time writes, “Through the touching, tragic story of two sisters, Persian Girls unfolds the entire drama of modern Iran. It’s a beautiful, harrowing memoir of the cruelty of men toward women, and it paints the exotic scents and traditions of Tehran with the delicacy of a great novel. If you want to understand Iran, read Nahid Rachlin.”

For more info, there are plenty of interviews available on the web, including Rachlin for NY Mag. 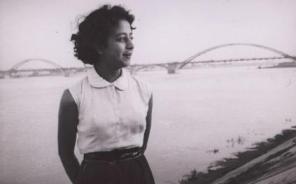 Nahid Rachlin as a girl

In my WGS class, we got to ask Rachlin questions about her writing and her life story. I was particularly interested in the ideologies about girls and women that are depicted in her memoir. When her father comes to take her back, he tells her that at nine years-old she is almost a woman. Through reading about her childhood and those of her brothers, it becomes clear that in Iranian culture, at least in her generation, girls were considered women long before boys were considered men. I asked her how much of that was ideological and how much girls were literally expected to be women rather than children. She explained that the experiences varied depending on how traditional the family was but nine was the age when girls make the transition to womanhood based on religious customs and are expected to participate in prayer, start wearing the hijab or chador, and live segregated from boys and men, separating from their male playmates. In her mother’s generation it was legal for girls to be married at nine years-old, as her mother was, but by the time she was a girl the age had been raised to 16. Still, because cultural transitions don’t happen abruptly, her father really did consider her a woman because he had married a nine year-old.

One of my classmates asked about violence against women and Rachlin explained that though the culture is quite oppressive to women, it is not anti-woman in a way that leads to violence such as rape or the abandonment or killing of baby girls. She said that even though boys are more prestigious and supported more legally and financially, parents still love and value their daughters and their restrictive practices are done because they think it’s what’s best for them. It was an interesting conversation about the nuances of sexism and understanding a culture that often seems worlds away.