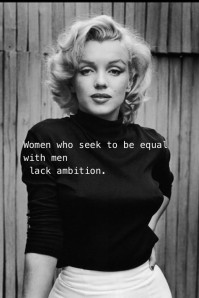 Or, better ways to say “you’re too hard on yourself”

This post brought to you from that post-semester haze in which I transition into my slower-paced winter break conference paper writing and research, tempered with a Top Chef bender.

I’ve often noted in my work the tendency to call girls bossy or dramatic when their male counterparts would be called leaders or assertive. It’s a trend documented by critical pedagogues, psychologists, and girlhood studies folk. It’s kind of a big deal, I think. But at a certain point, it just becomes childish or absurd to call women bossy, so instead I think the discourse shifts. Either people focus on their bodies (Hillary Clinton, Sarah Palin, et al.), call them bitches* (Hillary Clinton), or simply say that they are pushing themselves too hard. As with the term “overachiever,” which Linda Kreger Silverman says should be sworn-off in favor of high-achiever, as the former implies that girls are somehow exceeding what can be expected of them, telling someone that they are too hard on themselves may have an unintentionally limiting connotation.

The kicker is that it’s often said out of concern or love. For example, when someone criticizes their own performance, whether in a game, recital, exam, paper, etc, their loved one may respond, “You’re too hard on yourself” or “You’re pushing yourself too hard.” In this way, they betray an assumption that the person’s self-criticism comes from a place of low self-esteem or from unrealistic expectations. Whether intended or not, that subtext is there. And I think that’s why such statements are often met with defensiveness or increased assertions of “No, I could do better.”

That’s the thing, such self-criticism very well can, and often does, come from a place of self-esteem. Self-criticism may be overly harsh, but it also indicates that the person has high expectations of him or herself and is continuing to strive for betterment. There are some serious downsides to perfectionism, sure, but there’s also the potential benefit of a continued push to self-actualization. I know that women in fields that have traditionally been male-dominated–academics, culinary arts, politics (erm, life?)–tend to push themselves very hard. I know that I have personally observed a trend that people more often tell women that they are too hard on themselves when they may compliment men on their work ethic or ambition. How do we so easily forget that these traits (work ethic, ambition, self-assessment) are bound up with one another? Isn’t the implication that on some level we expect less from women?

I know though, that when you say “you’re too hard on yourself” or “you’re pushing yourself too hard” to the women in your life, it is coming from a place of love and concern and support, not sexism. I trust you. So, this holiday season, when you encounter the academics, students, chefs, mothers, career women and men of all sorts who you love, I offer these alternatives (I’m going to switch up gender pronouns because this issue affects both men and women, even though I stand by the comments above): 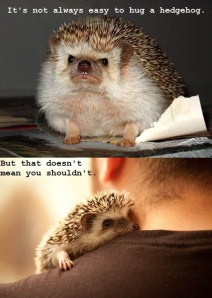 1) (My favorite) “You can’t talk about my best friend like that.” Can be adapted to fit relationship. My boyfriend uses this one on me when he thinks I’m being overly harsh toward myself. It defuses my tension and conveys affection without belittling my sense that I can do better. Go you, Julio.

2) “What went well about the project/meeting/event/whatever?” Often people focus only on the things they feel like they messed up. Show your support by encouraging your loved one to consider what he did well.

3) “[ ]’s a learning process. How can you improve?” Often when someone is being self-critical, she is being counter-productive. Encourage your loved one to consider what she can learn from her perceived failure. You can put a positive, reassuring spin on things without belittling her sense that she didn’t do her best and that that does matter–even if just to her.

4) “Well, I’m proud of you for…” Sometimes being hard on oneself does come from a place of fear that you don’t measure up or that you’re failing others’ expectations. A little specific support goes a long way.

5) Ask about feedback. This is tricky and is best used if you know more about context and your person’s daily interactions. But, if you feel confident that s/he has actually received positive or constructive feedback on the performance/paper/etc, bring attention back to that point. Often highly-critical people are their own worst critics, not just to be obstinate, but because they may have a hard time accepting/believing/internalizing positive feedback. It’s a thing. Especially in grad school.

6) “Take a break and recenter; then you can work on meeting your high-expectations.” Watch your tone, bring your loved one a drink or a cookie or a hug.

Sometimes it can be a pain to continually encourage your highly-motivated, highly-critical family member or friend or partner. Give her the benefit of the doubt, though, and act as though her attitude comes from a desire for excellence, not low self-esteem or general grouchiness. Instead of falling back on statements like  “you’re too hard on yourself” which may belittle her feelings and perceptions, try a different spin that lets her know you believe that she can be excellent too. Or that you already think she is excellent. Have another idea or suggestion? Hit the comments.

*Amy Poehler’s Leslie Knope had the greatest line in “Sam and Diane” about Ron’s crazy ex-wife Tammy making her reconsider her stance on the B-word that was so concise and powerful that it has me swearing off that word and ashamed that I ever said it.

One thought on “Push Harder: Supporting a Highly-Motivated, Highly-Critical Loved One”