Update: Check out these smart(er) folks at Slate (Conflict between Brave and Pretty?) & Jezebel (Beauty Comes Before Bravery).

This afternoon, hopefully as a reward for finishing a draft of my seminar paper, I’m going with a friend to see Pixar’s Brave. I am stoked. As I mentioned before, I have some questions about Brave, mostly involving the marriage plot and the dynamics of kinship. Plus there’s the fact that I’m not sure what this movie is really about except epic family adventures. More on all that after I’ve seen the film (!!!)

But for now, I want to mention the merchandising.

A few weeks ago, one of my professors sent me an article, “Is Mattel Brave Enough To Make An Un-Sexy Doll?” which raises critical questions about the disjuncture between the look of Merida in the film–wild, untamed, girlish–and the character portrayed in the dolls–mostly sexed-up. All that plays into an ongoing debate over sexy dolls for girls, taken up expertly by Peggy Orenstein in Cinderella Ate My Daughter. I hope Mommy bloggers take up this issue and discuss how their daughters are actually playing with the dolls. Maybe it doesn’t matter what the doll looks like as much if the girls are enacting the rough and tumble plot of the movie regardless of the doll’s sleek tresses. Or am I being optimistic? I think a study in this particular case would be really interesting for illuminating aspects of the debate over toy design vs use in play, especially regarding gender dynamics. But as yet I have no daughters and I don’t want to deal with the IRB. Mommy bloggers, go!

Flipping through the Target weekly ad this Sunday, I also saw some Merida costumes and raised an eyebrow. First, not to sound like a curmudgeon, but when I was a kid we played make-believe without specific fancy costumes. Kids these days…

Anyway, The Disney Store offers two Merida costumes. The Formal Brave Merida Costume (left below) and the Adventure Brave Merida Costume (right below). Most ads I have seen are only featuring the Formal costume. This raises my eyebrow because it’s the costume she is wearing for the smallest part of the movie (based on previews) and also the more princess-y. Ahem. 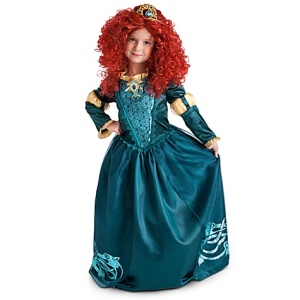 The Disney Store marketing copy for the formal costume reads: “Get your little adventurer all dressed up and ready for Scotland’s Highland Games and beyond! This finely detailed Formal Merida Dress inspired by the memorable scene in Disney/Pixar’s Brave features elegant accents fit for any grand occasion.”   For the Adventure costume: “Your little girl will embark on heroic adventures wearing our captivating Merida Adventure Dress. She’ll feel courageous and beautiful thanks to the ravishing glitter prints, sequin accents, and jeweled Merida cameo!” You can buy the archery set and wig separately. For some reason, I so want to be critical, but but but.

I have three main thoughts:

1) I think it’s interesting how the formal costume is advertised more actively than the adventure costume. This is the dress that she competes in the Highland Games (and beyond!) in! They show the little model with the bow in that costume. I wonder if little girls will rip their $50 seams to play the part? The actual adventure dress copy brings up feeling beautiful in glitter and sequins while the dress that Merida hates in the movie will “inspire” girls. It’s just…hrm…contradictory in interesting ways. Is it accidental? Are they marketing based on the previews not the actual film? Is there some underlying evil genius strategy?

2) I like the active copy. I appreciate that, while girlie and pretty, it is putting more emphasis on the heroic aspects of the character. The more prominent marketing of the dress Merida busts out of in the trailers makes me want to do some Gilbert and Gubar-ian analysis of the costume representing girls breaking free from gender norms in their play. But I seriously suspect that I’m just excited and six year-olds are not at all concerned with that. If they are, clearly they will be in grad school 19 years from now.

3) What actually bothers me is not anything about Brave itself. It’s the whole merchandising system. When I was little I had Little Mermaid sheets, an Ariel doll, a Belle doll, and a Beast doll. You could take his beast head and paws off and make him Prince Phillip. But why would you want to? I was never into Barbies, but with those dolls I felt restricted to playing them as the characters they were. Despite my undying love for those characters and how much I loved the dolls, the actual play was somehow less fun.  I can’t help but notice also that there is so much more merchandising now than there was when I was a kid. (Here’s a piece from the Pixar Times about Brave merch). And it’s aggressive as hell. I could say more, but really I will just recommend Cinderella Ate My Daughter. In the “Pinked!” chapter, Orenstein visits a toy expo and gets down to the nuts and bolts of how toy companies are explicitly marketing based on crappy gender distinctions. She also gets into the increasing sexualization of the dolls.

In the end, what it all amounts to is an increasing commodification of girlhood in which girl power is linked to spending power in ways that could trick girls out of exercising any real agency (read Angela McRobbie’s “Young Women and Consumer Culture”).

Back to my seminar paper, and hoping that the movie is spectacular.

3 thoughts on “Pixar’s Brave and Merchandising”