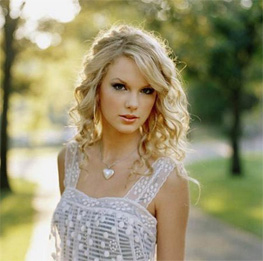 I started making fun of Taylor Swift with the release of “Love Story,” because, really, Romeo & Juliet and The Scarlet Letter are not romances to emulate. Did she take freshman English? Did she do the reading!? My friends Emily and Olivia have put up with much mockery from me over the years. When my eight year-old sister started listening to Swift’s music on repeat, however, it gave me pause. I did some reading on the ole’ internet and discovered many, many articles praising the 21 year-old musician for being a good-girl and a good role model. As she is not up to many Lohan or Spears-type antics, she writes her own songs, and is not Ke$sha, I’m okay with my sister enjoying her music.*

Swift however, claims that, “It would be really easy to say ‘I’m 21 now, I do what I want. You raise your kids!’ But it’s not the truth of it. The truth of it is that every singer out there with songs on the radio is raising the next generation.” (E!) That I am not willing to accept. No offense, Taylor, but I don’t want you raising my sister. I’m not even sure I want you as a role model. I’d prefer people like Rosa Parks or Marie Curie or Jesus or any number of strong men and women who are making real changes and doing cool things. I really do appreciate the wholesome image you’re maintaining amidst a pretty debauched industry. But pop music has its limits and I also want my sister internalizing things with more substance.

So, I decided to get Marissa’s take on the whole thing. With Dad’s permission, I interviewed her about music and role models. Here we go!

Kasey: Good morning. So, tell me, who are your favorite musicians?

Marissa: Taylor Swift, the Beatles, that’s pretty much it.

K: So you don’t like those classical composers anymore?

M: She’s country and I love country music. She has some personality in her singing. She has emotions and if she wants to she can put expression. Really strong expression. And she does more than singing on her CDs. She can do some talking and tell you about the different subjects in school.

M: There was this one CD, you can give a listen to it. It was just talking about writing. Basically probably because she writes songs.

K: What is your favorite song by Taylor Swift?

M: I would have to go with “Not a Fairytale.” Because she sings about her life and it sounds like a fairytale and she ends with [singing] “not a fairytale” just to give you a good laugh. It has some emotion too. Surprised emotion because she wants to sound surprised to guess what you’re going to be after she sings that “not a fairytale.”

K: Do you listen to music just to listen, or does the music speak to how you feel in some way?

M: It speaks to how I feel. It’s normally that I listen to music when I’m happy, but sometimes after her 8th song in the “Speak Now” track, it’s that I’m really sad. It’s about a little girl growing up. It’s about Taylor Swift’s life and it ends pretty sadly. It’s that she starts feeling really sad in the middle of the track and I feel sad too.

K: Do you feel like you have something in common with her in that song?

K: What is a role model?

K: A role model is a person who sets an example–good or bad–about how to act.

Who are your role models?

M: My mom. You [knowing smile]. My classmates, and Daddy. Josh. Everybody in this family, except for Lyle (cousin of same age) because we’re probably at the lowest of the pecking order. And the president.

M: Yes. Because I want to be all these jobs and number one is a musician so I listen to her to pick up the facts.

K: Since when do you want to be a musician? I thought you wanted to be a doctor?

M: I want to be a doctor, scientist, and musician. But not like someone is going to lick a guitar and feel better.

K: What about how she behaves outside her music?

M: She’s just really happy. Though some things can make her cry.

K: What kind of woman do you want to be when you’re a grown up?

M: I want to be like Elizabeth Blackwell* and Taylor Swift. Though I’m probably going to be the only woman to find the cure to cancer.

[Brief conversation about character and qualities]

K: What kind of qualities or values do you want to show in your life?

M: I already have sense of humor. I want to keep that. I want to show more respect. And kindness is already showing. And I can’t decide, so all of them.

K: Any final thoughts about our conversation.

M: Probably not. Because I need to let the dog out.

So maybe we’ll talk again when she’s older, but as of now, I guess there are worse people to rock out to or look up to than a happy girl with a guitar. Especially if you’re determined to find the cure for cancer. Some levity wouldn’t hurt. 😉

*I might add, I think my parents know what they’re doing. But as a much older sister who loves the kid like crazy and does critical analysis for a living, I can’t help but worry anyway.

**First woman awarded a medical degree in the U.S.  Marissa knows a thing or two.