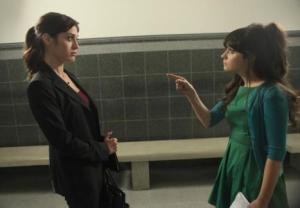 This weekend I went shoe shopping with my best friend. I squealed over one pair and asked, “Are these too girlie?” to which Emily replied, “Hi, have you met yourself?” At some point in the last few years I went from a tomboy to a girlie girl and a retro one at that. I bake, knit, wear vintage dresses, have a fluffy puppy, and listen to Peggy Lee. My fantasy is to be Charlotte Charles from Pushing Daisies. Throw in some dark brown bangs and, naturally, I think Zooey Deschanel and I should be pals.

I don’t watch Fox’s New Girl regularly because the way Jess almost caricatures Zooey Deschanel was turning me on my pal. I caught last night’s episode “Jess and Julia” and loved Jess’s defense of her girlishness:

“I brake for birds, I rock a lot of polka dots, I have touched glitter in the last 24 hours, […] and I find it fundamentally strange that you’re not a dessert person. That’s just weird, and it freaks me out. And I’m sorry I don’t talk like Murphy Brown, and I hate your pantsuit. I wish it had ribbons on it, or something to make it just slightly cuter. And that doesn’t mean I’m not smart and tough and strong.” –Jess, New Girl

In last night’s “Jess and Julia” episode (Watch here), Jess defends her girlieness to a powerful lawyer who Nick is dating.  This issue has already been addressed by Slate and Entertainment Weekly.  I personally prefer bows to polka dots and I would never use checks with baby farm animals on them. But let’s be clear, like Jess, I think I could throw down. My weapon of choice just happens to be kindness (Thanks, Mom).

In short, what I appreciate about this episode is that it dramatizes what Deschanel argued in New York Magazine (“The Pinup of Williamsburg”): “That people equate being girlie with being nonthreatening … I mean, I can’t think of a more blatant example of playing into exactly the thing that we’re trying to fight against. I can’t be girlie? I think the fact that people are associating being girlie with weakness, that needs to be examined. I don’t think that it undermines my power at all.”

I choose to perform my femininity in a vintage, sundressy way and I do so as a feminist who thinks about what it means to be a woman (specifically an intellectual woman of faith) a lot. I do so to subvert, in my own way, the popular mis-expectations of what it means to be a smart, powerful woman and a feminist. A lot of my students and acquaintances outside the academy expect that feminism demands that women not be feminine in any traditional way and I, personally, think that’s bullshit (as do many of the feminists I know). Like Deschanel, I think sidelining all things girlie affirms the notion that it’s disempowering. Plus, I think it’s fun and it’s just who I am. I like pretty things, that doesn’t reduce my ability to think critically. Making pies actively helps me think through papers I’m stuck on. So there.

I also think, however, that there has to be some awareness of what girlieness encodes culturally. How do people read girlieness? What does it imply about sexuality and gender? I think for girlieness to really be empowering there has to be more critical thought to the embodiment than the simple argument of “you can’t tell me not to; that’s sexist.” There needs to be some sense of subversion or strength or a “yes, I’m girlie, but/and.” Because there’s so much policing and restriction surrounding notions of girlieness, just ignoring the cultural assumptions that are constructing what it means to be girlie can’t work. If that’s what Deschanel and other girlies are doing, they are not leading people to re-examine girlieness at all.

Maybe this post didn’t need to be written, but when something happens that excites me like this, I like to share. There’s so much more to be said about girlie-girl culture and its relationship to femininity/feminism, but at a later date.

By the way, I bought the shoes. And I taught in them because I rock lesson plans and 3 1/4″ pumps.

P.S. What I didn’t like so much was yet another portrayal of how girls fight in a subtle, backhanded way. Sure, this may be a fact of life at this point in American culture, but do we have to reiterate it again and again as though it can’t ever be changed?

P.P.S. What was the DEAL with Schmidt and the damp towels? It was like to be female was somehow to be moist (ew but, yes, I realize the implications) in a way that took me back to theories of the leaky female body from the Middle Ages. What!?

4 thoughts on “I rock a lot of polka dots: New Girl and Girlieness”